Springbok coach Jacques Nienaber praised the attitude of his players as they put in a convincing improvement against the British & Irish Lions at Cape Town Stadium on Saturday, and said the support from the public was equally touching.

The Springboks won 27-9 after scoring 21 unanswered points in the second half, with Makazole Mapimpi and Lukhanyo Am scoring second half tries, and Handre Pollard adding 17 points with the boot.

According to Nienaber, the Boks also won all the important scraps in a highly physical and tough Test. The Bok coach said the way the players responded after last week’s defeat – as well as how they took responsibility to improve – made his job easy.

“The players in our leadership group are very experienced, and we are in a fortunate position as coaches to have so many of them,” said Nienaber.

“Last week we lost the kicking game in the second half and the way the players responded during to the week to adjust and make better decisions was really great. Sometimes I feel more like a facilitator than a coach with all the great inputs we receive from the guys.”

Jack Conan is too late to stop Makazole Mapimpi from scoring.

Nienaber said they were overwhelmed by the support shown by the Bok supporters, many of whom showed up outside the team hotel earlier in the day and lined the route to the stadium.

“The support was amazing, we had so many people outside our hotel from early in the afternoon,” said the Bok coach.

“On the way to the stadium, the roads were full of our supporters. I am so happy we could do it today, it was for them as much as it was for us.”

The Bok coach said the players are ever improving, as they are now getting proper training time together, following the isolation forced by COVID cases while they were still in Johannesburg.

“We are still growing as a group,” said Nienaber.

“We only had two full weeks of training – we are still building, and we will get better, as long as we stay humble and work hard. The Lions came with new plans this week, and we adapted to that. This time we were ready, last week we were not.” 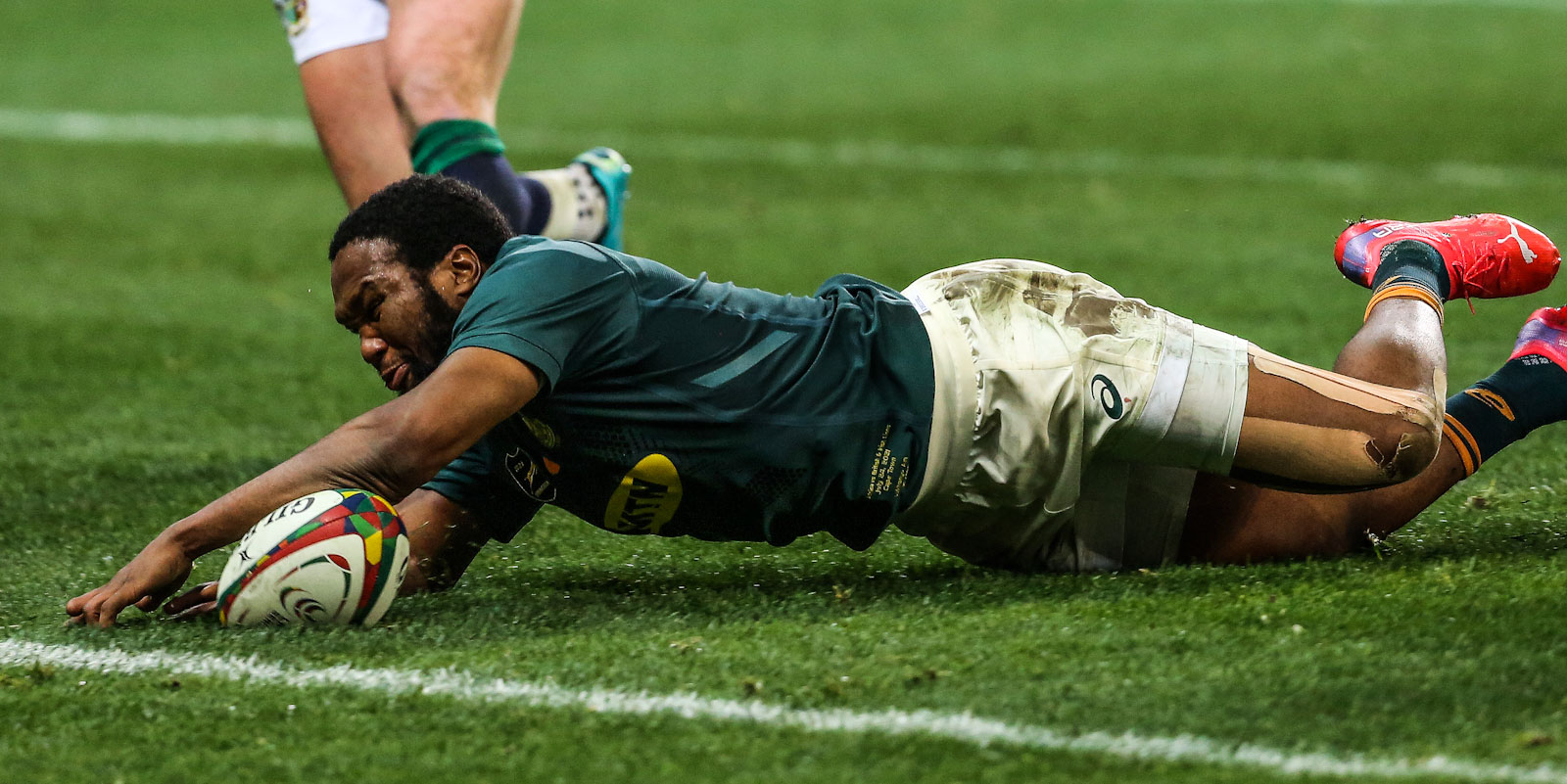 Lukhanyo Am makes no mistake with the Boks' second try.

Nienaber said an injury assessment on Pieter-Steph du Toit will be done early in the week. Du Toit was replaced by Kwagga Smith in the 20th minute and the Bok coach praised the impact of the South African replacements.

“Last weekend we lost the second half 19-5, this time we were pretty dominant. We had a good impact of the bench and that helped us a lot,” said Nienaber.

For Springbok captain Siya Kolisi, the win was important as the players knew they needed to rebound in convincing fashion.

“Our focus was intentional this week – we knew what mistakes we made and how not to repeat them,” said Kolisi, who added that they will continue to strive for improvement.

“We had the right attitude to rectify that. It started at training.

“There is still a lot to play for, and we did not have a perfect game – next week will be another battle. Last week’s Test was good for us in that it gave us game time. Another week did wonders for us.

“This time it was not the system that changed, we won the scraps. We need to be better in certain areas, but we managed to control the controllable.”

Springbok captain Siya Kolisi and assistant coach Mzwandile Stick adopted a positive attitude to the pressure on the team on the eve of their vital second Test against the British & Irish Lions at Cape Town Stadium on Saturday, and said they were determined to improve the quality of their performance.

The Vodacom Bulls laid down a strong marker in the Carling Currie Cup when they beat DHL Western Province by 34-13 at DHL Newlands on Friday evening, to move to the top of the standings.

Pumas edge Lions to stay in the hunt

The New Nation Pumas scored a third win in the 2021 Carling Currie Cup, beating the Sigma Lions 36-33 in a highly entertaining match at Emirates Airline Park in Johannesburg on Friday.

SA Under-18 to Georgia called off

SA Rugby and the Georgia Rugby Union (GRU) announced on Friday that the planned SA Under-18 tour to Georgia had been called off due to the prevalence of positive COVID cases in both countries.

Versatility not a burden for Damian Willemse

Damian Willemse is willing to step into any role required as the Springboks attempt to level the Castle Lager Lions Series and said they have everything to play for as the countdown continues to the crucial second Test against the British & Irish Lions on Saturday.

Relive all the action from the second Lions Test

The Boks bounced back with a brilliant 27-9 win in the second Test of the Castle Lager Lions Series.

Milestones, records and celebrations for the Boks

There is no place to hide in the Carling Currie Cup as the three visiting sides made life tough for their hosts this weekend, with the New Nation Pumas, Vodacom Bulls and Tafel Lager Griquas victorious.

Experienced No 8 Duane Vermeulen will join the Springbok team at their Cape Town base on Sunday after missing the opening two Tests against the British & Irish Lions due to an ankle injury.

Jaden Hendrikse has been called up to join the Springbok squad in Cape Town on Monday as additional scrumhalf cover in the build-up to the Castle Lager Lions Series decider on Saturday 7 August.

Springbok captain Siya Kolisi and assistant coach Mzwandile Stick adopted a positive attitude to the pressure on the team on the eve of their vital second Test against the British & Irish Lions at Cape Town Stadium on Saturday, and said they were determined to improve the quality of their performance.

Relive all the action from the second Lions Test

The Boks bounced back with a brilliant 27-9 win in the second Test of the Castle Lager Lions Series.