The Blitzboks claimed the Vancouver leg of the World Series last weekend as well, going unbeaten in their 12 matches in Canada, which Powell attributed to the coming together of their defence and attack.

“The guys really stuck to their guns out there and deserve all the credit,” said Powell.

“They implemented so well, and the results are there for all to see. We are a team that pride ourselves on our defence and only conceded four tries all weekend, but even more pleasing was the clinical nature of our attack. We really scored some excellent tries.”

South Africa outplayed Great Britain in the final, Kenya in the semi-final and Hong Kong in the quarter-finals in Commonwealth Stadium on Sunday, and with the double, finished top of the standings in the World Series, which was shortened to two tournaments in 2021.

Powell said the fact that the likes of Fiji, New Zealand and Argentina did not travel to Canada, does take some sheen away from winning the World Series, but the Blitzboks could only play what was in front of them.

“You cannot deny that those three teams – having won gold, silver and bronze at the recent Olympics – would have enhanced the competition, but there was nothing we could do about that,” he said.

“We could only go out and deliver the best performances we are capable of, and I think we did that very well and for that I am massively proud. We still played against some very good teams out there.” 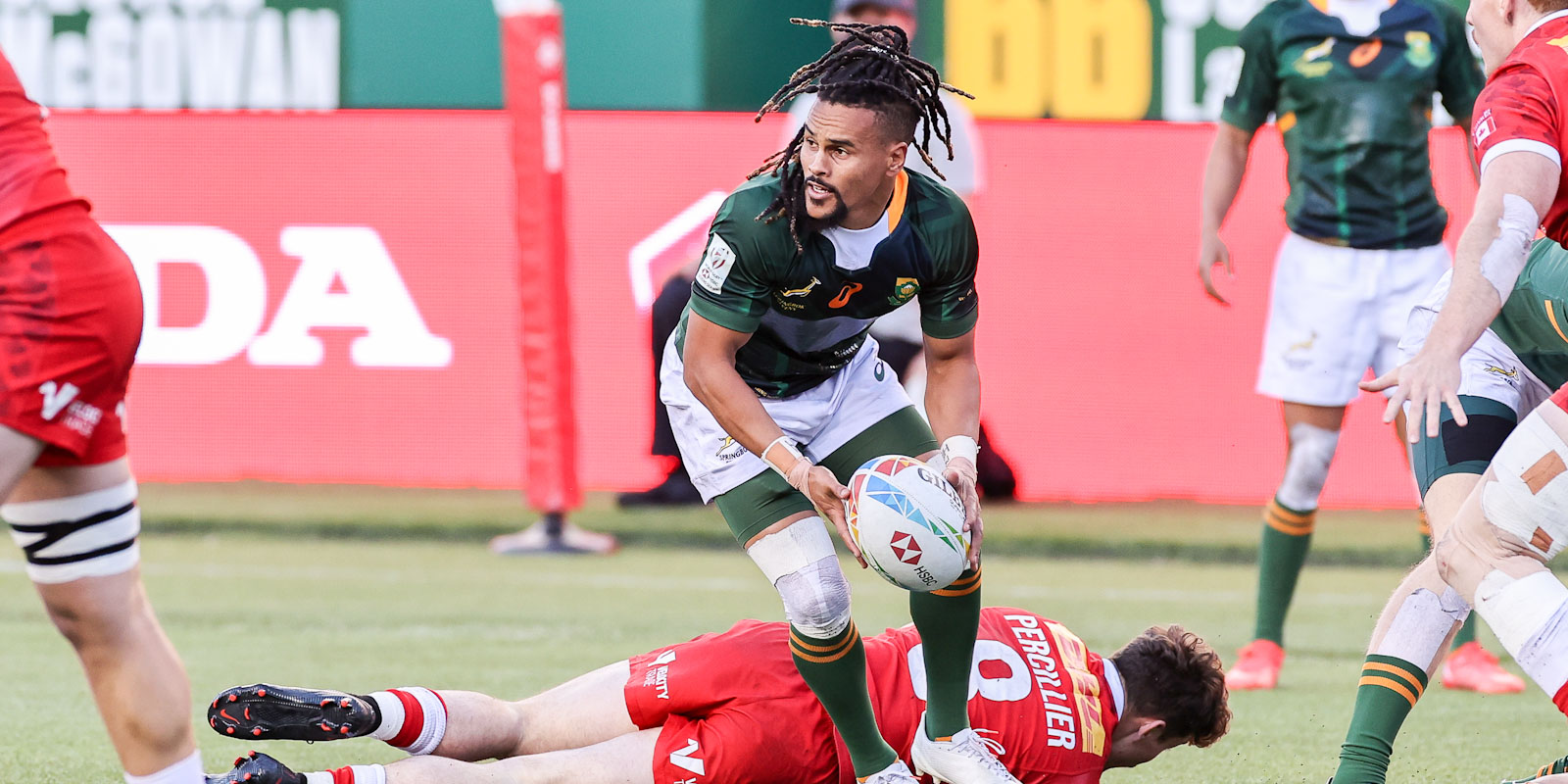 Selvyn Davids looking for a runner.

Powell praised his younger players – four players made their Blitzbok debuts in Canada – and said the Olympic medallists would have tested them in different ways.

“I would have loved having them here in that they would have tested us in different areas of play – for example, Fiji are great at kick-offs, and it would have been interesting to see how our younger guys coped with that,” Powell said.

“Those teams protect the ball very well too, so it is not as much the standards – which I thought were good at these two tournaments – but rather the variety of playing styles that I would have liked for our players to experience.” 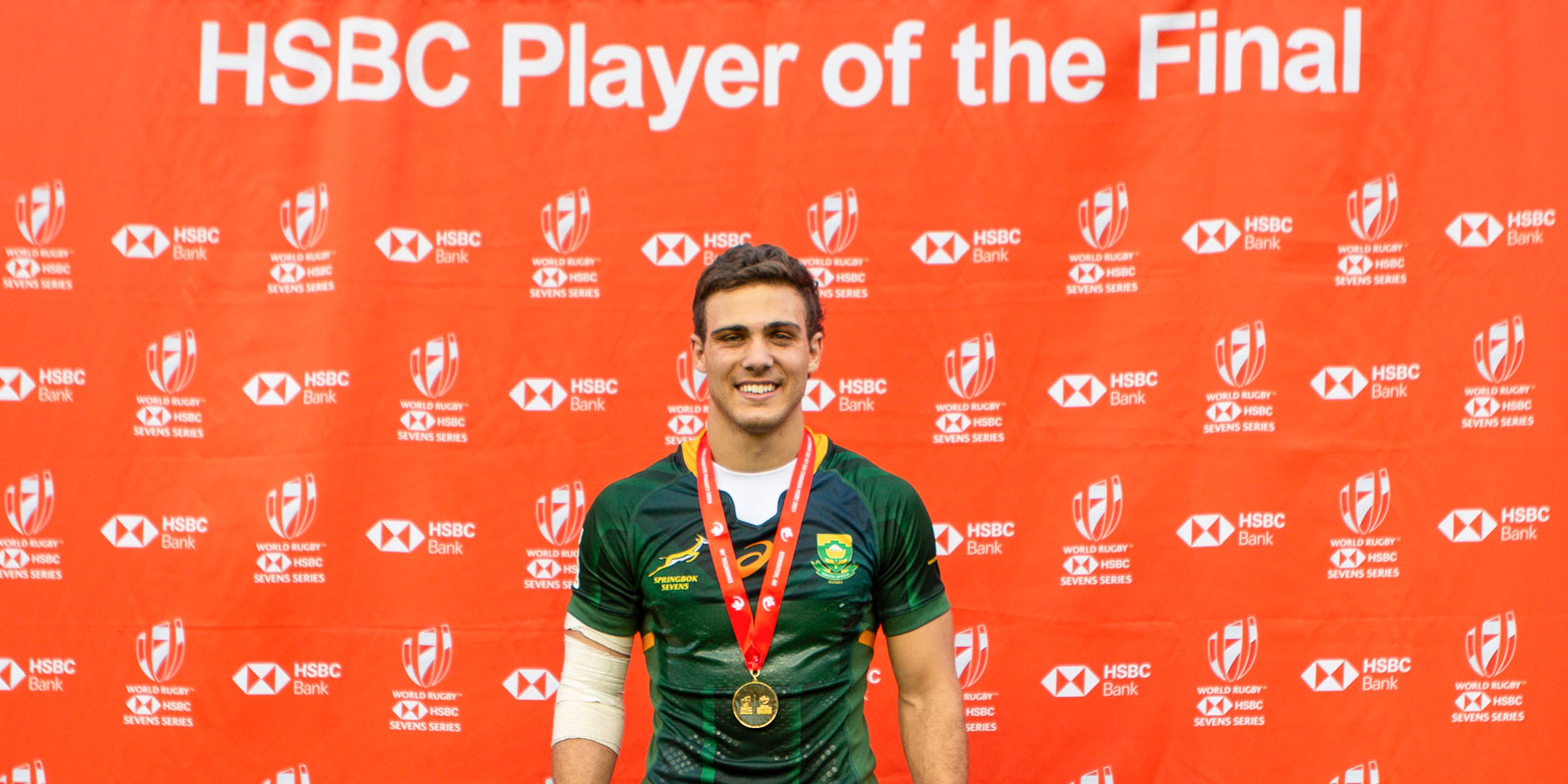 Muller du Plessis was the Player of the Final and the leading try-scorer in the World Series 2021.

Muller du Plessis, who was named the HSBC Player of the Final, said the months on the training field came to fruition in Canada.

“We have been training for months now, so everyone knew exactly what to do and when to do it,” he said. “We really trusted the system and stuck to our processes, and it brought massive rewards.”

Du Plessis scored 11 tries in Edmonton, a feat he attributes to the support of his teammates: “The finishers could finish because of the excellent work done by others. The guys really implemented what we prepared and it brought the results, so there is massive joy for all of us. Everyone contributed to this.”

The fact that the team last played in a World Series event 18 months ago also added fuel to the fire.

“We were so keen to go out and play,” added Du Plessis.

“It was fantastic to be out there again, doing what we love. There were so many smiles out there and the guys were determined to have some fun. I think we succeeded in implementing what we trained, but at the same time had so much fun in doing that.” 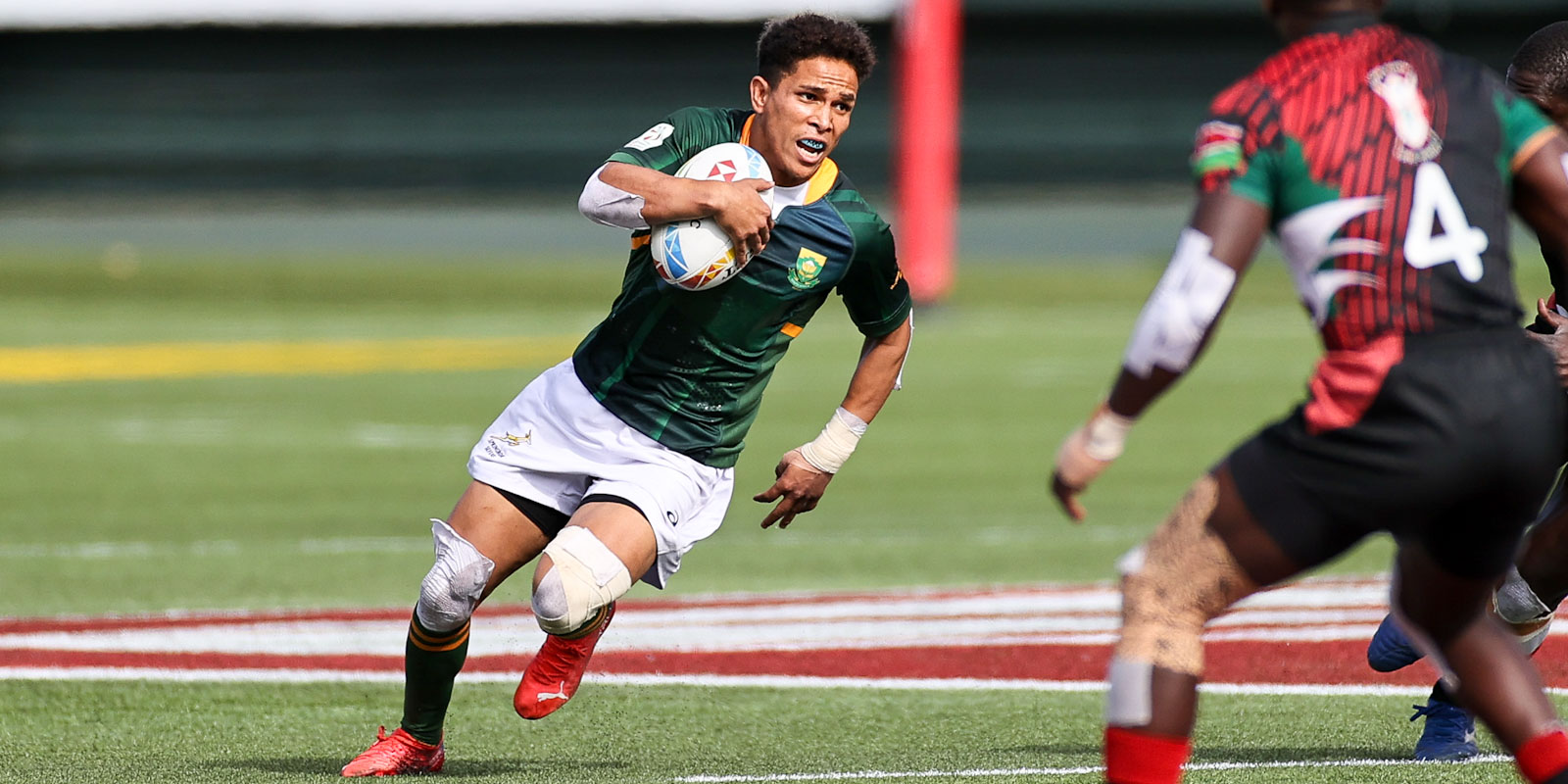 Ronald Brown scored the most points in the HSBC World Rugby Sevens Series in 2021.

Selected stats from the 2021 World Series:

Emirates Lions flyhalf Jordan Hendrikse will link up with the Springbok Sevens team in London on Monday and will make hi...

Blitzboks own worst enemy in Toulouse...

The Springbok Sevens team suffered a third defeat at the HSBC France Sevens in Toulouse on Sunday in what Blitzbok coach...

The Springbok Sevens squad failed to progress to the Cup quarter-finals of the HSBC France Sevens tournament in Toulouse...

The Springbok Sevens team will have to beat Samoa with a convincing score in Toulouse at 12h22 on Saturday if they want ...

Blitzboks ready to blast off in Toulouse...

It took them a while to get to Toulouse, but since their arrival on Monday evening, the Springbok Sevens team left littl...

Boks vow to give everything in final Rugby Champs clash

Springbok flanker Kwagga Smith vowed that the team will leave everything on the pitch when they meet New Zealand in their closing Castle Lager Rugby Championship clash in Gold Coast next weekend after their heart-breaking 19-17 defeat in Townsville on Saturday.

The four South African sides in the Vodacom United Rugby Championship were given a baptism of fire on the opening weekend of the new competition, with only the Emirates Lions getting a victory in the Northern Hemisphere.

Boks denied at the death in another NZ nail-biter

The Springboks suffered the agony of seeing New Zealand fullback Jordie Barrett’s 77th minute penalty condemn them to a 19-17 (halftime 13-11) defeat in a nail-biting Castle Lager Rugby Championship match in Townsville, Australia – the 100th meeting between the teams.

Springbok coach Jacques Nienaber made two injury-enforced changes to his matchday squad for their final Castle Lager Rugby Championship clash against the All Blacks in Gold Coast, with Ox Nché earning a starting berth and Jasper Wiese being drafted in among the replacements.