The Springboks started their 2022 Castle Lager Rugby Championship campaign in the best way possible by beating New Zealand 26-10 at a packed and vibrant Mbombela Stadium in Nelspruit on Saturday in what can only be described as a dominating start to the tournament.

The Boks held a 10-3 lead at the break and never looked in danger of losing against the All Blacks in a match where they dominated the physical contest, held most of the territorial advantage and more significantly, tactically outplayed their traditional foes in black.

They out-tackled, out-worked, out-thought and outplayed New Zealand in front of a packed crowd of 42367, in a performance that bodes well for the Boks' aspirations in the remainder of the tournament.

It was far from an ideal outing for coach Jacques Nienaber though as he lost Faf de Klerk in the opening minute of the match, and an impressive Kurt-Lee Arendse near the end of the contest, with both leaving on a stretcher after taking a knock to the head.

De Klerk, who made three tackles in an opening minute of frantic action, got his head on the wrong side of Caleb Clarke’s knee, but Arendse, so industrious in his first outing against the All Blacks, a debut try performance ended in misery as he misjudged an aerial contest with Beauden Barrett. He ended up stretchered off and red-carded for what can only be described as a clumsy effort.

Looking at the percentages though, Arendse was clearly on the wrong end of the stats. The Springboks outduelled the All Blacks all night in the kicking contest, with Arendse and fellow wing, Makazole Mapimpi, imperious in the air, allowing their side’s dominance in that aspect, only for the former Blitzbok speedster getting it wrong the umpteenth time of trying to contest, and ultimately win the ball back for his side. 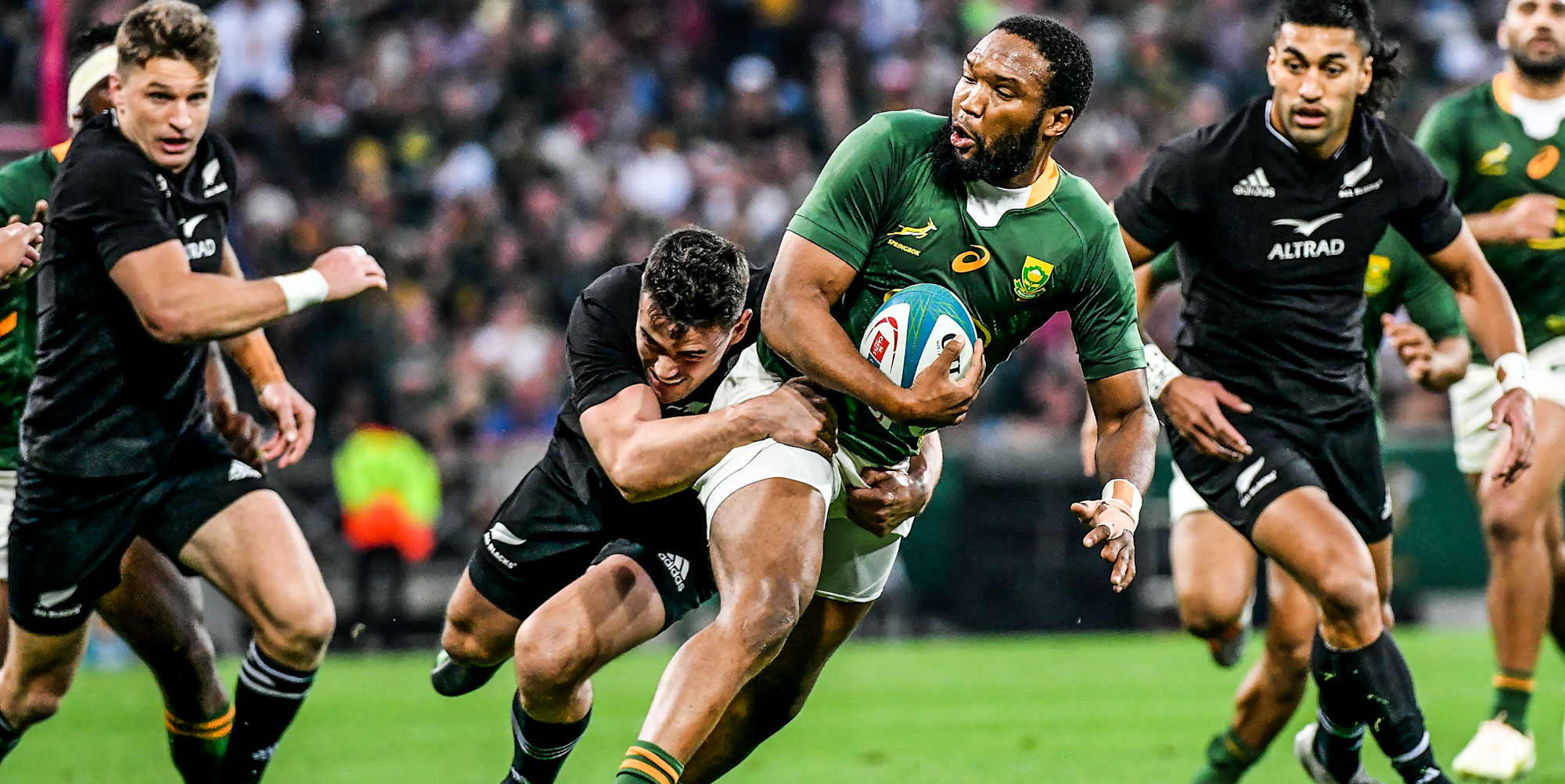 Lukhanyo Am gets the pass away that led to Arendse's early try.

The match started in the worst possible way for the Springboks with De Klerk being knocked out cold as early as the opening minute of the match. Jaden Hendrikse replaced him and did a stellar job, showing his continued maturity at Test level.

The early De Klerk incident interrupted what was most likely the most intense five minutes of rugby all season. It took some of the early sting out of the contest, but nothing was going to deny the Springboks their relentless pursuit on anyone in a black jersey.

Despite De Klerk's injury, the Boks were determined in a clinical way and dominated the early stages. They won the first scrum penalty and then another. The All Blacks were under pressure and Mapimpi had a good run, but was stopped, but in a blink, they scored in the other corner when Arendse got his first and most memorable try in only his second Test.

Pollard kicked high and Beauden Barrett tried to palm it back to his team mates, only to find Lukhanyo Am. The foxy centre laid it out to Arendse who scored in the right hand corner.

Pollard converted and the Boks were up 7-0 in the opening 10 minutes, at which stage they had 19 carries to five. They also had 80% possession and the 70% territory stat was a real reflection of the early dominance. Malcolm Marx put in a Man of the Match performance in his 50th Test for South Africa.

The Boks only made their first error in general play 15 minutes in when Malcolm Marx lost the ball in contact. The hooker, in his 50th Test, did 1000 things right though and was named Man of the Match in a brilliant reminder of his talents. Marx was accurate at lineout, bossed his opponents at the breakdown and carried hard and effectively.

Pollard kicked a first penalty goal 22 minutes in to take the lead to 10 points after Sam Cane played the ball on the floor, trying to slow it down.

New Zealand were slowly getting into the game though and had a good spell on attack, taking the ball through numerous phases and starting to build and looked threatening, but Boks snuffed it out with clutch tackle that forced a knock-on.

They finally enjoying some possession and field position to play from and when Damian de Allende was ruled offside from an attacking scrum, Jordie Barrett stepped up for what would be considered easy points, given the technicality of the offence.

The last moments of the first half played out in the Bok half and New Zealand seemed to be regaining some parity on the field.

The second half did not deliver the same frantic start, but how was anyone going to beat that anyway? The Boks were still winning the aerial battle thanks to Mapimpi and Arendse. 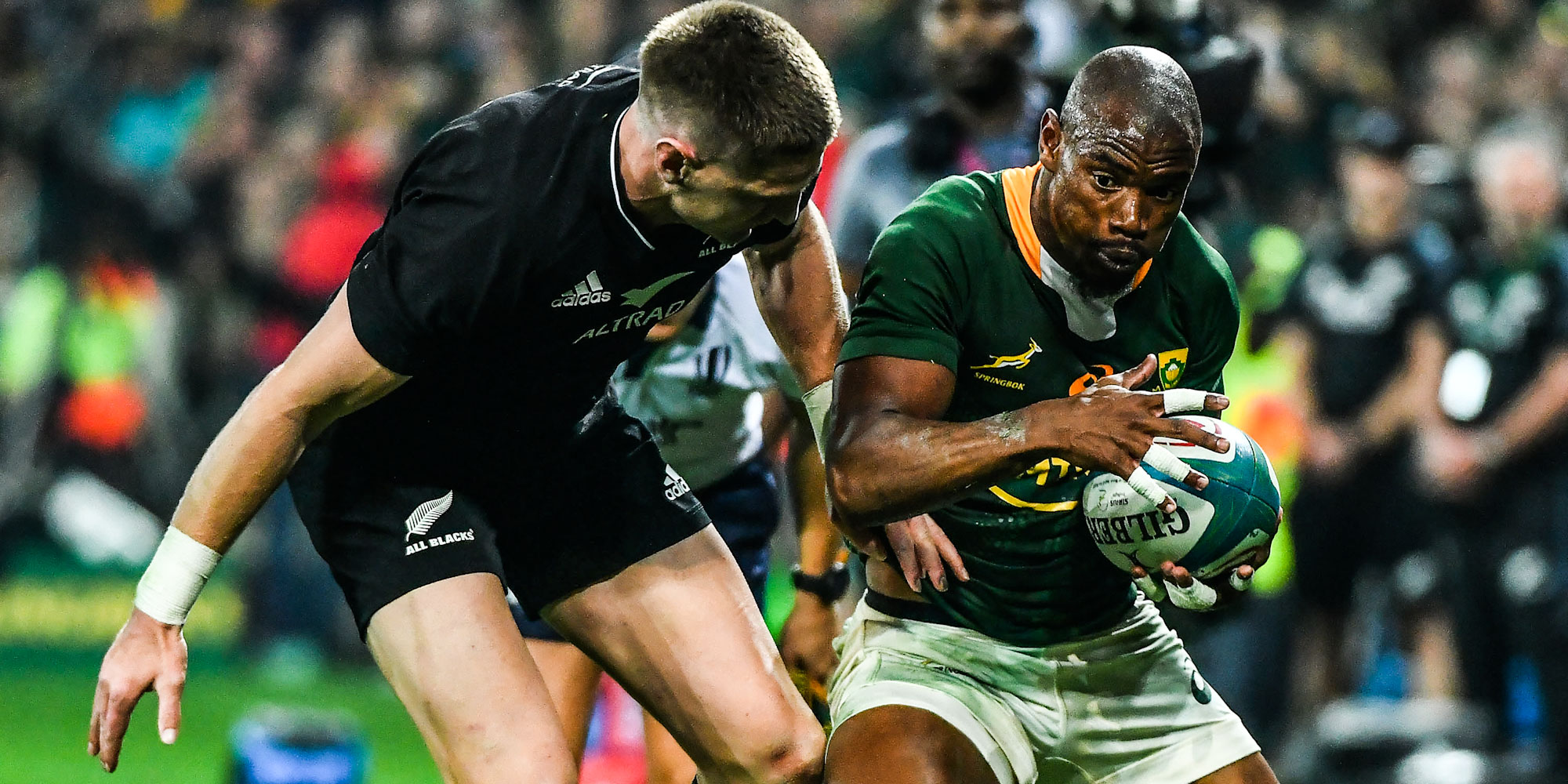 Makazole Mapimpi was a constant threat on attack for the Boks.

The bench came and further added misery to New Zealand. Kwagga Smith replaced Pieter-Steph du Toit and Franco Mostert came on for Lood de Jager, and both made a telling impact, with Smith proving a real menace.

They had instant reward as Pollard slotted a second penalty goal after the Boks bossed yet another scrum, with the pivot kicking his 140th penalty goal in green and gold in his 63rd Test to take the lead to 13-3 after 50 minutes.

The finishers were starting to appear from all over and Mbonambi replaced Marx, who had a stellar 50th, after 55 minutes.

Pollard was still around though and starting to enjoy himself, kicking a drop goal after 57 minutes, the perfect option at the perfect time. That extended the lead to 16-3 after 58 minutes.

The visitors had some good moments and looked dangerous from a good lineout drive, but Dan Coles lost the ball in the tackle near the line as the Bok defence held firm.

Pollard kicked the third penalty goal as the All Blacks continued to transgress under pressure, but they finally got it right when Shannon Frizzell scored following a good Clarke break down the middle. The score came in the 78th minute though, way too late and it proved counterproductive.

Chasing a losing bonus point, the All Blacks tried to run from inside their red zone, only for a silly pass to end up under the feet of Willie le Roux, who gratefully accepted and scored a try to seal a famous and deserved win.

The Springbok Women’s Sevens team, who finished seventh at the Commonwealth Games in Birmingham, will now turn their attention to the World Rugby Sevens Challenger Series on 12-14 August in Santiago, Chile, where they will try and qualify as a core team on the HSBC World Rugby Sevens Series.

With kick-off times now confirmed for all 18 rounds of the Vodacom United Rugby Championship, fans can subscribe to the league’s innovative ‘Ecal’ fixture list that puts ticketing, the latest event details and broadcast listings directly onto their device.

Klipdrift and the Springboks reunite in new sponsorship deal

SA Rugby announced on Friday that iconic South African brandy, Klipdrift, has been named as a new sponsor of the Springbok rugby team, with the well-known brand unveiled as Official Associate Partner to the national team.

Selection for the Junior Springbok Women will be one of the many rewards on offer to the country's leading Under-20 players in Cape Town this weekend, when the SA Rugby Youth Training Centres tournament takes place at City Park.

Relive the Boks' big win over NZ in Mbombela

The Springboks started the Castle Lager Rugby Championship on the right note by beating New Zealand at the Mbombela Stadium on Saturday.

Springbok hooker Malcolm Marx, who celebrated his 50th Test cap with a memorable 26-10 victory against New Zealand in Nelspruit on Saturday in the opening round of the Castle Lager Rugby Championship, said the Boks would work equally hard this week as they prepare to face their arch-rivals again in Johannesburg on Saturday.

Boks bracing for another bruising battle in Joburg

Bok Women’s preparations for Spain off to a good start

The Springbok Women started their Test week with a good session in Potchefstroom and will be ready to go on Saturday when they take on Spain at Emirates Airline Park in Johannesburg in the first of two Tests.

Talented former Junior Springbok utility back Canan Moodie has been called up to the Springbok squad as cover at wing and will join the group in Johannesburg on Monday evening.

Relive the Boks' big win over NZ in Mbombela

The Springboks started the Castle Lager Rugby Championship on the right note by beating New Zealand at the Mbombela Stadium on Saturday.