DHL Stormers hang on for the win in Kimberley

The DHL Stormers’ set-piece play and broken-field attack were too good in a hot and windy Kimberley as they beat Tafel Lager Griquas by 38-32 in a 2021 Kick-Off Pools match on Tuesday afternoon.

Their attack was also top notch as the Capetonians outscored their hosts by five tries to four, with the DHL Stormers’ young flyhalf Kade Wolhuter contributing 18 points in total in an entertaining match that went down to the wire after a late revival by the home team.

Tafel Lager Griquas looked full of running, managed to get into the right areas on the field and they really tested the Capetonians’ defence, but untimely mistakes crept into their game – such as a technical offence while on attack, near the DHL Stormers’ try-line, in injury time, when a converted try could have clinched the victory.

With their pack on fire, the DHL Stormers slowly gained the upper hand and although their backs failed to capitalise with the good possession, they looked dangerous in broken play, especially when the big men got involved in taking the ball up. 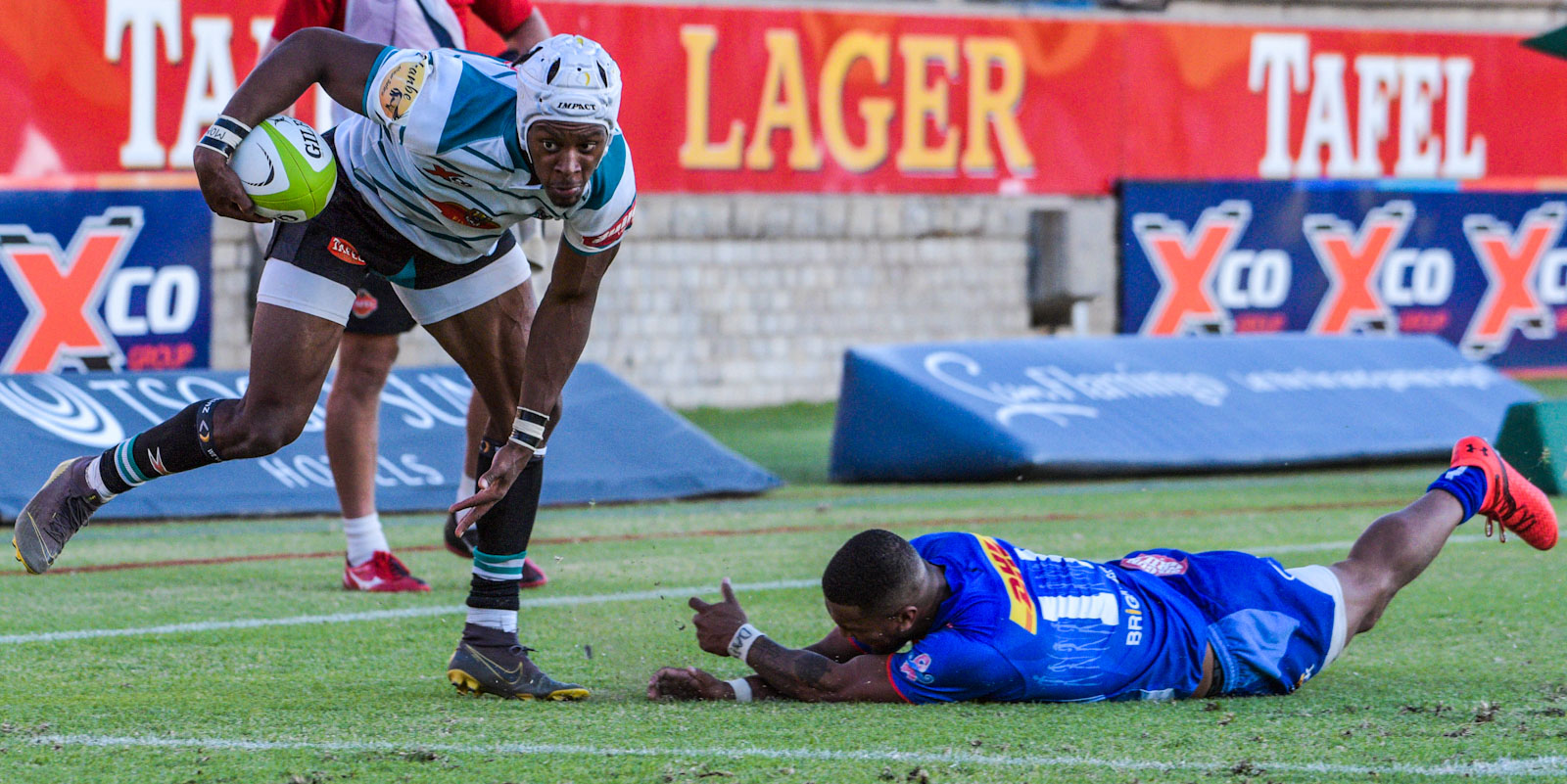 Daniel Kasende goes over for his try

After 40 minutes, two converted tries by Godlen Masimla (scrumhalf) – the second with his direct opponent, Stefan Ungerer in the sin-bin – and a third by Sergeal Petersen (fullback), moments before the break, ensured the visitors were in the lead by 24-13.

Earlier, veteran wing Ederies Arendse dotted down for the men from the Northern Cape after a great move from an attacking lineout, with some hard and straight running causing the DHL Stormers problems on defence.

Two quick tries in the second half, by Marcel Theunissen (flank) and Wolhuter, all but sealed the deal for the DHL Stormers, although the home team refused to give up as the game started losing structure.

HJ Luus (replacement hooker), Daniel Kasende (replacement wing) and Tinus de Beer (replacement flyhalf) scored tries in the final quarter for Tafel Lager Griquas, but the gap on the score board was too big as they ran out of time.

The Springbok Sevens won a fourth HSBC World Rugby Sevens Series when they completed the North American double by winnin...

Etzebeth: "Our motivation is to play for SA"...

Eben Etzebeth says the Springboks will be driven by the pride and passion of representing South Africa when they line up...

Snyman’s return massive for Munster, and the Boks...

The return to the playing field of Springbok lock RG Snyman may have been a footnote in Munster's 42-17 Vodacom United R...

Vodacom Bulls Director of Rugby, Jake White, has opted for continuity in selection of the starting line-up when the Vodacom Bulls travel to Nelspruit to square off against the New Nation Pumas in their 2021 Kick-Off Pools clash on Tuesday.

Michal Haznar has returned to Kimberley from Cape Town and will start against his former team-mates on Tuesday, when Tafel Lager Griquas host the DHL Stormers in the Northern Cape.

Johann van Graan’s Munster have booked a place in the Guinness PRO14 final for the first time in four years, but their celebrations would have been tempered a bit the following evening had they watched the ease with which Leinster went about securing their own spot in the 27 March decider.

The New Nation Pumas have made wholesale changes to their starting line-up for Tuesday’s match against the Vodacom Bulls in Nelspruit.

Abrahams, Chait and Meyer to start for Cell C Sharks

Thaakir Abrahams, Jordan Chait and John-Hubert Meyer have been named in the Cell C Sharks’ starting line-up for their second 2021 Kick-Off Pools match, against the Toyota Cheetahs in Bloemfontein on Wednesday.

The national junior rugby programme will resume in April after a one-year hiatus due to the COVID-19 pandemic, with the SA Rugby Academy set to kick off in Stellenbosch.

FNB Varsity Cup back with a bang (in a bubble)

South Africa’s biggest varsity rugby tournament is back and will feature some exciting changes, with all games hosted in Tshwane this year.

Next steps announced for amateur return to play

SA Rugby announced that club rugby, from Under-19 level upwards, will be permitted to move to contact training (Phase 2 of the integrated return to train and play) from Monday 15 March, provided all players had undertaken non-contact training for at least four weeks.

Two out of two for Lions in warm-up series

The Lions continued their winning form in the 2021 Kick-off Pools as they defeated a determined Eastern Province outfit by 54-24 at the Nelson Mandela Bay Stadium in Gqeberha on Wednesday.

Vodacom Bulls Director of Rugby, Jake White, has opted for continuity in selection of the starting line-up when the Vodacom Bulls travel to Nelspruit to square off against the New Nation Pumas in their 2021 Kick-Off Pools clash on Tuesday.

The national junior rugby programme will resume in April after a one-year hiatus due to the COVID-19 pandemic, with the SA Rugby Academy set to kick off in Stellenbosch.