Plaatjies to debut for South Africa in Tunisia

Asisipho Plaatjies will make her international debut for the Springbok Women’s Sevens team at the Rugby Africa Women's Sevens tournament in Tunisia this weekend after she was named in a fairly experienced squad assembled by coach Paul Delport.

The tournament, which features nine teams, will be played at Mustapha Ben Jannet Stadium in Monastir, Tunisia on Friday 29 and Saturday 30 April, when Delport and his squad make their return to international action for the first time since the HSBC Cape Town Sevens in December 2019.

The trip to the north of Africa will also be a return to Tunisia and the continental showpiece, where the South African side were crowned champions when they last competed in this competition in October 2019.

Six players earned gold medals on that trip, with Sizophila Solontsi this time returning as captain, while Mathrin Simmers, Eloise Webb, Nadine Roos, Liske Lategan and Rights Mkhari's familiarity with the tournament will ease the nerves for the squad's return to the international stage.

Delport also named Lusanda Dumke in the squad for her first trip to the African competition, although the SA Rugby Women's Player of the Year for 2021 has played at the HSBC Cape Town Sevens. Snenhlanhla Shozi is also back in the Springbok Women’s Sevens squad after she last played for the team at the 2018 Rugby World Cup Sevens in San Francisco, USA. 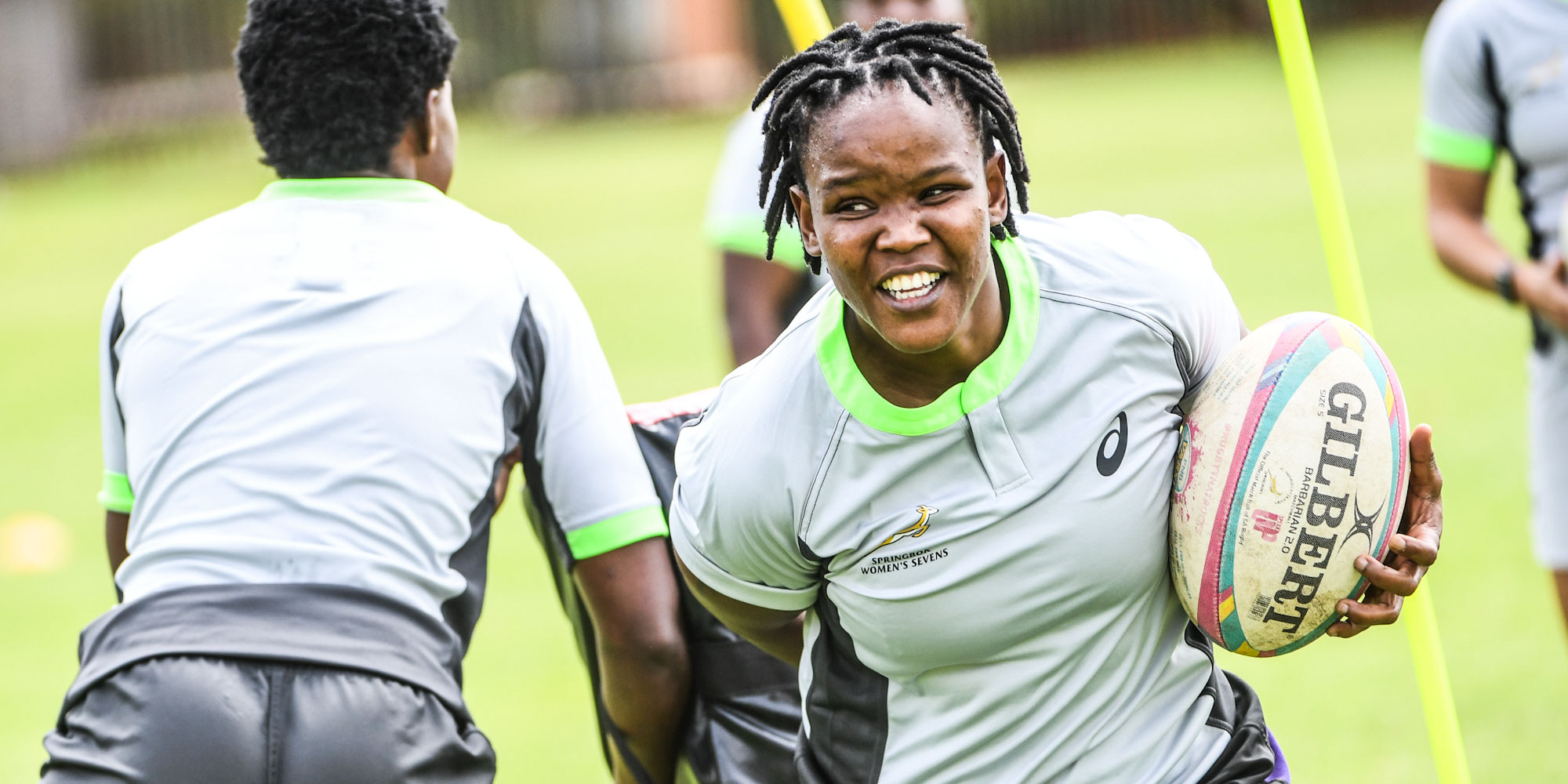 Alichia Arries, Donelle Snyders and Anacadia Minnaar have worn the green and gold before, having represented the Springbok Women previously, but they will make their international debut in the sevens code in Tunisia.

Delport expressed his satisfaction with the squad and the preparation that included four previous training camps in Stellenbosch and the departure camp in Pretoria.

“We had a lot of work to do when we started in January this year, but I cannot fault the effort of the players in the last four months as we have come a long way,” said Delport.

“The lack of competitive action for two years is a reality for us, but we now have that opportunity to put it all behind us and get back to international sevens.

“The winner in Tunisia gains entry into the Commonwealth Games, so that was a big focus for us. We leave for Tunisia tomorrow knowing that we gave ourselves the best chance to be successful.”

Wearing the captain's armband is nothing new to Solontsi, who regularly captained the Cell C Sharks Women in fifteens, so the challenge for her will rather be to get the team to play at their full potential in a season full of firsts.

“The core leadership group is an experienced one and they help out where needed, and I am also impressed with the younger players and their energy and willingness to learn,” said Solontsi.

“This resulted in a team that worked hard to become better individually, but also as a team. Getting out there to play with and for each other will contribute even more.

“We are all pretty excited to be back playing international sevens again. The potential entry into the Commonwealth Games is a massive attraction, but we are not looking at anything else than our own effort and that first game, where we need to lay down the marker for the rest of the tournament.”

For Plaatjies, a University of Fort Hare Public Administration student and Border Ladies midfielder who turned 26 years old on Sunday, her call-up came as the perfect birthday present.

“I am humbled and honoured,” she said.

“When I was called up to that very first camp in January, this moment seemed extremely far away, I just wanted to learn as much as I could and now that I will get the opportunity to play for my country, I am so happy.

“A number of players have been to Tunisia in the past and informed us of what to expect, and everyone is very well aware that we will need to be at our absolute best if we want to be successful,” added Plaatjies.

The Springbok Women’s Sevens will face hosts Chile at 19h00 on Sunday in a rematch of their pool encounter to determine ...

Expanding support base next step for Springbok Wom...

A new sponsor, rubbing shoulders with the Springboks and playing on the same field on the same day as the Rugby World Cu...

The 44-5 win over Spain in their first of two Women’s Winter Series Test matches at Emirates Airline Park in Johannesbur...

Bok Women’s Sevens drop out of contention in Chile...

Their Springbok Women’s historic win against Japan confirmed the belief that their preparations are on track and showed ...

The DHL Stormers marched into an impressive second place and the Cell C Sharks into fourth on the Vodacom United Rugby Championship log, while the Vodacom Bulls remained in eighth position in a rewarding round for three of South Africa’s four sides.

Dr Dawie de Villiers, a former Springbok captain who passed away at the age of 81 on Saturday night after a long battle with cancer, was honoured for his role in South African rugby, but also in the wider society as a politician later in his life, by Mr Mark Alexander, president of the South African Rugby Union.

The 2022 Women’s Premier Division kicked off with a big upset on Saturday, when the Blue Bulls Women shocked defending champions Border Ladies 12-0 in Pretoria in the opening round to lay down an early marker in the new season.

The Cell C Sharks had to dig deep to beat an inexperienced Leinster side by 28-23 (half-time 14-17) in a very tense Vodacom United Rugby Championship clash played in difficult conditions in Durban on Saturday evening.

Mr Mark Alexander, President of SA Rugby, paid tribute to former Springbok loose forward Pedrie Wannenburg, who passed away after he was involved in a serious car accident in Houston in the USA on Friday evening (early on Saturday morning SA time). He was 41 years old.

With 500 days to go to the start of the Rugby World Cup in France in 2023 on Tuesday, Springbok coach Jacques Nienaber said excitement started to build with the global showpiece moving into view, despite a bumper 2022 season still ahead for South Africa.

Exciting young scrumhalf Bernard van der Linde scored a try at the death as UP-Tuks edged Maties 29-23 in a dramatic final in Stellenbosch to claim the FNB Varsit Cup title with the victory equaling the most number of trophies won by a side, as the students from Stellenbosch and Pretoria have now each won the competition five times.

The Springbok Women's Sevens’ return to the international stage is not only welcomed by Paul Delport, but also the more experienced players, and added to that, there is massive excitement amongst the younger squad members who will be involved in international sevens rugby for the first time.

Stormers change three for top of the table clash

The DHL Stormers starting team for Saturday's top of the table clash in the Vodacom United Rugby Championship against Leinster in Cape Town show three changes from the side that beat Glasgow Warriors last week.

The South African franchises will be desperate for one last big shove as they wrap up their home run in the league phase of the Vodacom United Rugby Championship this weekend, with three of the four sides looking to give themselves the best possible chance to secure favourable quarter-final spots.

The DHL Stormers marched into an impressive second place and the Cell C Sharks into fourth on the Vodacom United Rugby Championship log, while the Vodacom Bulls remained in eighth position in a rewarding round for three of South Africa’s four sides.

With 500 days to go to the start of the Rugby World Cup in France in 2023 on Tuesday, Springbok coach Jacques Nienaber said excitement started to build with the global showpiece moving into view, despite a bumper 2022 season still ahead for South Africa.