Best of the best to assemble in Rondebosch

SA Rugby’s annual Youth Weeks tournaments will come to a highly anticipated conclusion in Cape Town this week with the U18 Craven Week bringing together the best of South African schools’ rugby talent.

Sixteen teams registered at Rondebosch Boys’ High School earlier on Sunday, with hosts, DHL Western Province, afforded the opportunity to field a second team and Limpopo Blue Bulls adding the extra numbers to the 14 existing provincial unions that have graced the tournament for decades.

Despite the undeniable landmark this week has become on the South African rugby landscape, the COVID pandemic prevented the hosting in 2020 and 2021, and it will be great relief at the first kick-off, when Eastern Province and Griquas open the tournament at 10h00 on Monday at this iconic school in Cape Town’s southern suburbs, celebrating their 125th anniversary this year.

The cancellation of the tournament in the last two years meant missing out on the opportunity for some of the country’s best age-group players, with a number of them currently in Italy, representing the Junior Springboks in the Six Nations Under-20 Summer Series.

Such an example is Junior Bok scrumhalf Niel le Roux, who played for SWD at U16 level in 2019, only for the former Oakdale Agricultural School star to be deprived of the honour to play at the U18 Craven Week level in 2020 and 2021.

“My message to the guys will definitely be to appreciate and enjoy the opportunity and to enjoy every second of it,” said Le Roux.

“For me, missing out on Craven Week was a huge disappointment as it was something I worked hard for. Being selected for the Junior Boks made up for that, but it is still something I could never have. So, the guys must appreciate the occasion and make sure they make memories. Good luck to all the teams out there.”

Another highlight of the tournament is the selection of the SA Schools and SA Schools A sides and this year will be no different. Many a professional rugby career was kick-started this way and this will again provide a pathway to that, and the relevant selectors will be keeping a close eye on all matches. 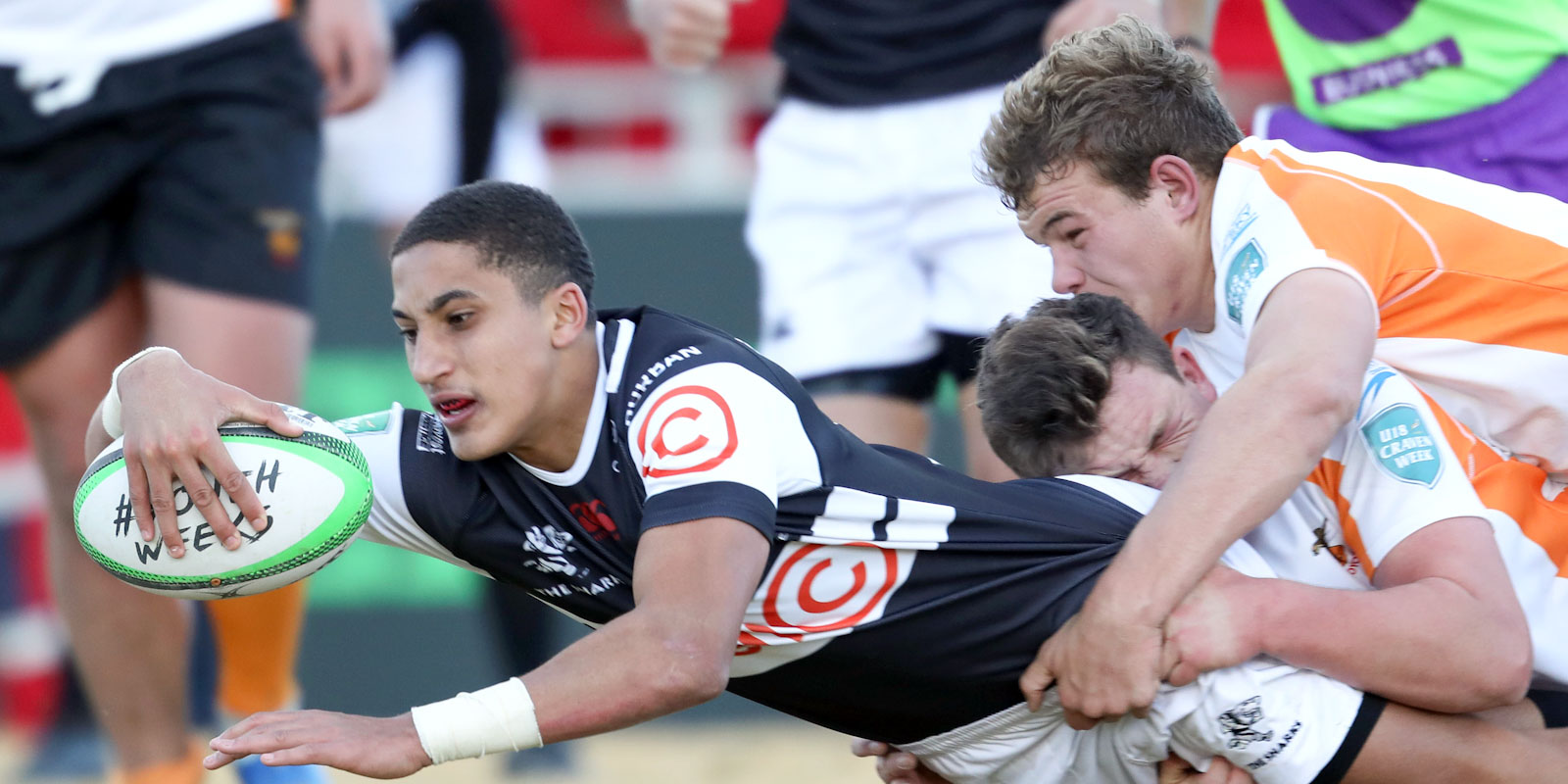 Jordan Hendrikse during the 2019 Craven Week.

Speaking about pathways, all eight match officials involved will be on debut at the tournament, with one of them Hanru van Rooyen, a former Craven Week player himself, having donned the No 10 jersey for the Leopards at the 2017 tournament.

The talent on show will be scrutinised and nurtured by four SA Rugby Referee department coaches, while Archie Sehlako and Egon Seconds will also double up as TMO's for all the matches, to be screened live by SuperSport.

Incidentally, the main field at Rondebosch is named after Tinkie Heyns, who himself was a legendary referee for the host province for many years.

Four matches will be played on the Tinkie Heyns Field on Monday, which will include the opening ceremony of the tournament, with the remaining eight teams running out on Tuesday.

All matches will be live on SuperSport.

The Springbok Women’s Sevens will face hosts Chile at 19h00 on Sunday in a rematch of their pool encounter to determine ...

Expanding support base next step for Springbok Wom...

A new sponsor, rubbing shoulders with the Springboks and playing on the same field on the same day as the Rugby World Cu...

Boks leave it very late to edge Wales in Pretoria

A last-gasp penalty goal by Damian Willemse secured the Springboks the narrowest of wins over Wales in the first of three Castle Lager Incoming Series Test matches, with the 82nd minute effort edging the home side past Wales by 32-29, after the visitors held an 18-3 lead at the break.

Second half performance what Boks were looking for

A relieved Springbok coach Jacques Nienaber praised his composed team as they overturned a 15-point halftime deficit to record a 32-29 victory over Wales at a packed Loftus Versfeld in the first match of the three-Test Castle Lager Incoming Series on Saturday.

Carling Champions Team too good for Italy A

It wasn’t 2021 all over again as the Carling Champions Team had to work hard for a 31-27 victory over a tough Italian ‘A’ side at the Nelson Mandela Bay Stadium on Saturday night, after the visitors led by 17-10 at the break of the second annual Carling Champions Match.

A new digital portal bringing South African rugby supporters closer to the Springboks and other national teams has been launched by SA Rugby in partnership with principal partner MTN.

Kolisi and Stick hope to make SA proud against Wales

Springbok captain Siya Kolisi and assistant coach Mzwandile Stick were thrilled about the prospect of playing in front of a capacity crowd at Loftus Versfeld in Pretoria on Saturday when they kick off their Castle Lager Incoming Series against Wales and said they wanted to make the nation proud.

Boks ready for another hard grind against Wales

Springbok assistant coach Deon Davids expected a backlash from Wales after their tightly fought 32-29 victory against the team in their opening Castle Lager Incoming Series match when they meet at the Toyota Stadium in Bloemfontein on Saturday in the second of their three Tests.

The Junior Springboks side to face France in their vital U20 Six Nations Summer Series clash in Verona on Tuesday has undergone several changes, which include a couple of positional switches.

Craven Week back with a bang

The return to the SA Rugby rugby calendar of their flagship schools tournament, the Under-18 Craven Week, was celebrated with a barrage of tackles, sidesteps, counter-attacks and ultimately, tries at Rondebosch in Cape Town on Monday, with four matches celebrating the resumption of the tournament in 2022 after a two year absence.

The Junior Springboks outplayed France by 42-27 in Verona on Tuesday evening to finish top in Pool A and stay unbeaten at the Six Nations U20 Summer Series currently staged in Italy.

Boks leave it very late to edge Wales in Pretoria

A last-gasp penalty goal by Damian Willemse secured the Springboks the narrowest of wins over Wales in the first of three Castle Lager Incoming Series Test matches, with the 82nd minute effort edging the home side past Wales by 32-29, after the visitors held an 18-3 lead at the break.

Boks ready for another hard grind against Wales

Springbok assistant coach Deon Davids expected a backlash from Wales after their tightly fought 32-29 victory against the team in their opening Castle Lager Incoming Series match when they meet at the Toyota Stadium in Bloemfontein on Saturday in the second of their three Tests.