Boks vow to give everything in final Rugby Champs clash

Springbok flanker Kwagga Smith vowed that the team will leave everything on the pitch when they meet New Zealand in their closing Castle Lager Rugby Championship clash in Gold Coast next weekend after their heart-breaking 19-17 defeat in Townsville on Saturday.

The Springboks held a 17-16 lead against the All Blacks with three minutes left to play, but a late penalty goal by Jordie Barrett crushed their hopes of a strong fightback in the competition following back-to-back defeats against Australia.

Both teams scored a try and kicked four penalty goals apiece, and in the end, it was a successful conversion by the All Blacks that edged them to victory.

The Springboks travelled to Gold Coast on Sunday for the closing match of the competition in what will mark the team’s 17th successive week together and Smith said they were as determined as could be to wrap up their campaign with a victory.

“We definitely have what it takes mentally and physically to push through for another week,” said Smith.

“We were hungry going into Saturday’s game after last week’s performance (the 30-17 defeat against the Wallabies), and I think we played well, but we were a little unlucky.

“We have a good squad here and everyone is positive.

“It’s the last game before we have a bit of a break, so we’ll give it our all and make sure we leave everything on the pitch.”

Springbok centre Damian de Allende admitted that suffering their second defeat in three matches from a penalty goal in dying minutes was bitterly disappointing, but he was pleased with the team’s effort to work their way into a position to come away with a win. 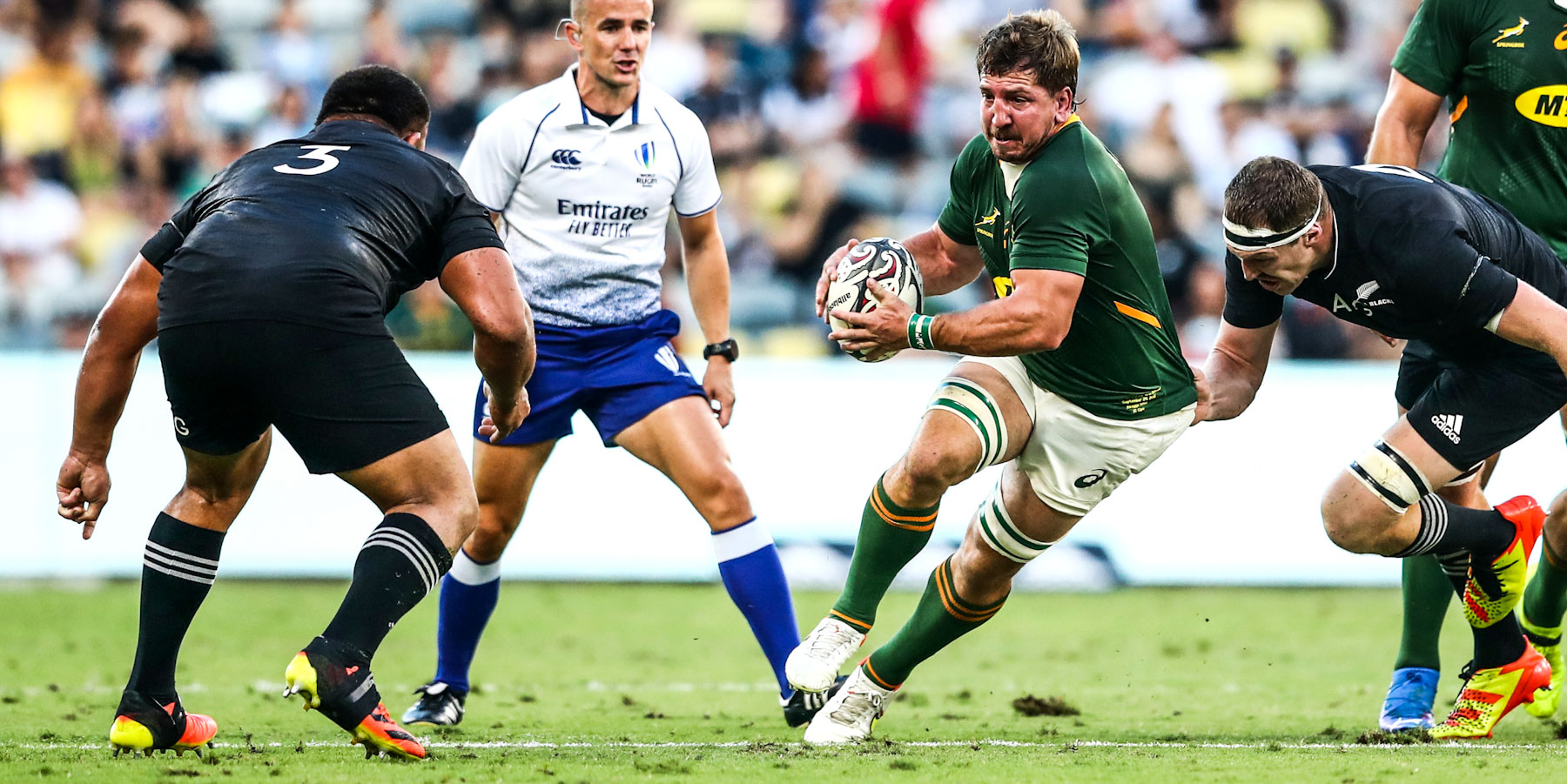 Kwagga Smith on the attack against the All Blacks.

“I thought we controlled the tempo quite well,” said De Allende.

“We got ourselves into the game nicely and I thought we were quite dominant with the tempo. That said, we are heart-broken because we feel we deserve a lot more, but that’s part of the game.

“Against the British & Irish Lions we got that last penalty, and against Australia it went against us, and it did again tonight, but we’ll continue working hard, and hopefully next time it will turn in our favour.”

De Allende was also encouraged by the vast improvement in the Boks’ defence after conceding four tries in their second match against Australia in Brisbane.

“Our defence was much better than last week and the week before - it was solid, and I felt we dominated our hits,” said De Allende.

“We had a good chat this past week and got our detail right. The All Blacks were good in their set piece attack, and I think we adjusted well.

“Obviously they pose a great attacking threat, and they did got around us a few times, but I thought we scrambled very well tonight and tried to do it for each other.

“The effort and everything else was there, unfortunately we just fell short.”

Smith was equally disappointed about the result, but he said it was special to start against All Blacks.

“The number on my back doesn’t matter because of the game plan we play,” said Smith.

“It was great to have an opportunity to start against the All Blacks again and it was a good fight against them. We were unlucky to fall short, but that is the game of rugby.”

Boks denied at the death in another NZ nail-biter

The Springboks suffered the agony of seeing New Zealand fullback Jordie Barrett’s 77th minute penalty condemn them to a 19-17 (halftime 13-11) defeat in a nail-biting Castle Lager Rugby Championship match in Townsville, Australia – the 100th meeting between the teams.

The Springboks put in a massive performance in their Castle Lager Rugby Championship Test against New Zealand in Townsville, but a 78th minute penalty goal by Jordie Barrett – his fourth of the match – saw the All Blacks snatch a 19-17 victory.

Benetton scored 15 unanswered points in the final quarter to win their Vodacom United Rugby Championship season opener against the DHL Stormers by 22-18 in Treviso on Saturday.

Irish powerhouse Leinster gave the Vodacom Bulls a proper welcome to Northern Hemisphere rugby when they won their Vodacom United Rugby Championship opener convincingly by 31-3 at the Aviva Stadium in Dublin on Saturday.