The Vodacom Bulls pulled off a nail-biting 43-37 victory over the Sigma Lions at Loftus on Saturday evening thanks to a solid first-half performance in this Carling Currie Cup fixture.

The defending champions and hosts went into the halftime break with a 35-17 advantage following some sparkling attacking rugby which produced five converted tries. Their Gauteng neighbours crossed the line twice and also slotted a penalty goal.

However, a dramatic second half produced some exciting attacking rugby, lots of powerful scrums – especially from the visiting side – and brave defence from the home team.

It was the team in white and red jerseys who came charging back with an outstanding second half display, outscoring the hosts by 20-8 to set up a thrilling finish which ended in a somewhat bizarre circumstance.

Sigma Lions Burger Odendaal (centre) unwittingly passed the ball to a grateful Richard Kriel inside the Lions in-goal area for the Vodacom Bulls replacement centre to dot down for the winning score.

Before that try, the Sigma Lions roared back to within one point of the home side (38-37) to once more come within touching distance of registering that elusive first win of the 2022 campaign. But much like in their two previous two games, the Joburg outfit paid the price for making a slow start.

The result leaves the Vodacom Bulls in first spot on the league table with 42 points from 10 ten games, followed by the Toyota Cheetahs on 41 points from their nine-game unbeaten run.

Gert Smal’s team raced into a 21-7 lead after just 20 minutes thanks to three well executed tries.

Skipper Lizo Gqoboka was the first one over the line when he was on hand to receive a tap-and-go pass from five meters out. The Jozi outfit showed great tenacity to hit back with a try of their own through Ruben Schoeman (lock), and when Jordan Hendrikse (flyhalf) added the extras, the scores were once more even at 7-all.

Then followed a great passage of play for Light blue jerseys as they dominated territory and possession to score two more impressive, converted tries.

Experienced former Springbok hooker Bismarck du Plessis crashed over next to the upright after some powerful pick-and-goes, while he was followed over the whitewash by left wing David Kriel when he finished a clever lineout set-piece move. 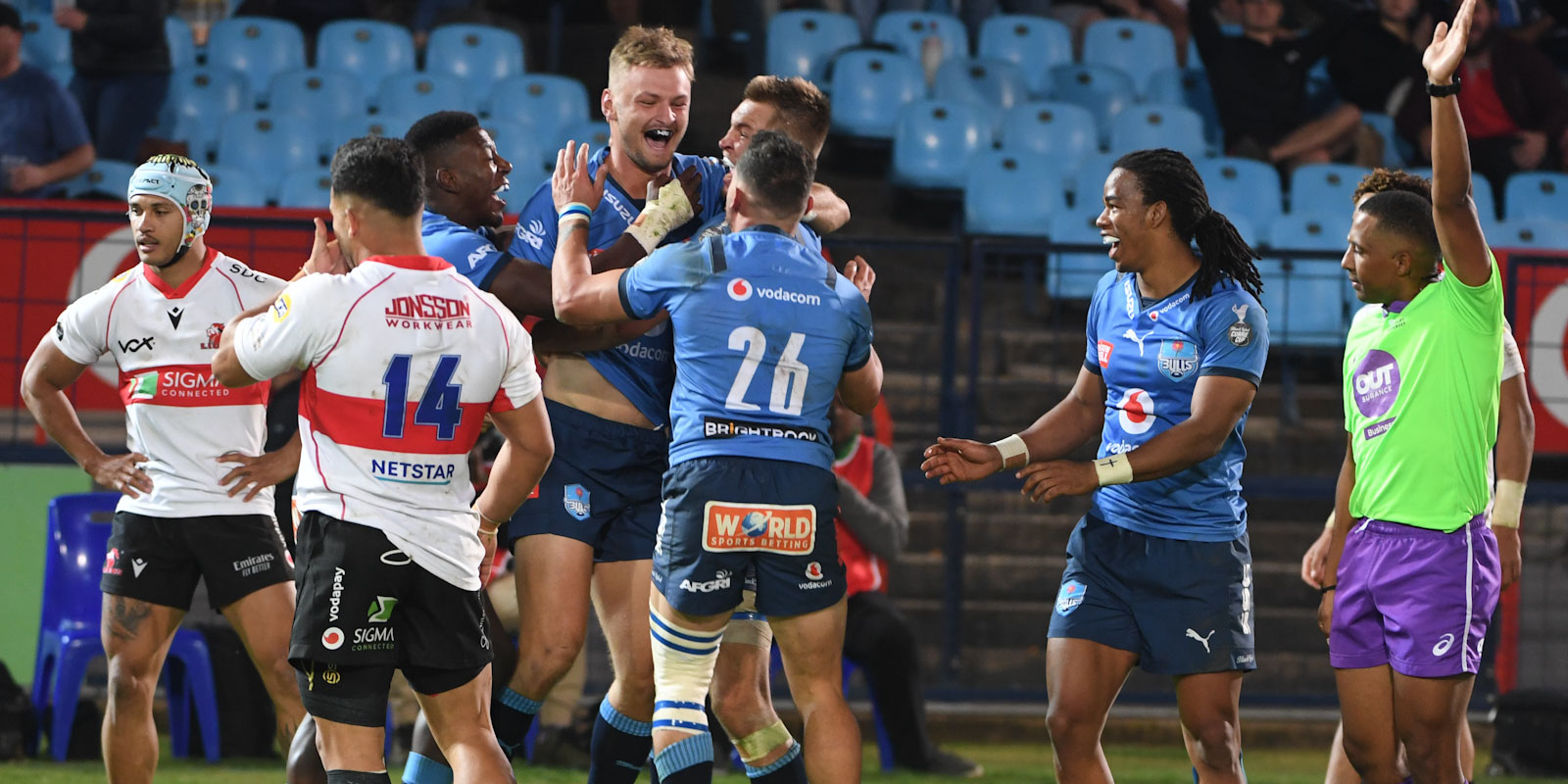 In between, Lions pivot Hendrikse slotted a penalty goal, but the home side kept on with trying to up the tempo. This tactic led to their fourth try, by No 5 lock Janko Swanepoel, who went over as the Sigma Lions struggled to match the intensity.

And when the home backs showed some lovely hands in limited space to create try number five, scored by outside centre Stedman Gans. This passage of play stretched their advantage to 35-10.

With two minutes of play allowed after the halftime hooter has sounded already, the Joburg team produced a powerful scrum to setup a converted try for stalwart midfielder Odendaal, which brought the halftime score to 35-17.

The second half was more of a cagey affair initially, with the Lions using their powerful scrum to good effect. To their credit though, they refused to give up and it was only a matter of time for their dominating scrum to deliver points, which it did when No 8 Francke Horn had the simple task of dotting down.

That signalled a huge swing in momentum to the visiting side, and they scored two more tries, first through Hendrikse and then No 6 flank Sangweni Sibusiso. When Hendrikse raised the flags with his mid-ranged penalty kick, the visiting team was now trailing by just one point at 38-37 and less than five minutes to go.

Then followed that strange play, when Odendaal passed to Kriel behind the Lions goal line for a try which broke the Lions’ resistance.

Springbok flanker Marcell Coetzee said this weekend will about seizing the opportunity as the Boks look to seal the Cast...

Junior Springbok assistant coach Chean Roux heaped praise on the SA U20s after their 42-27 victory over France put them ...

A highly competitive third day of the SA Rugby Under-18 Craven Week once again confirmed why this flagship schoolboy tou...

Springbok coach Jacques Nienaber named two uncapped players in his starting lineup and a further four among the replacem...

The Junior Springboks outplayed France by 42-27 in Verona on Tuesday evening to finish top in Pool A and stay unbeaten a...

The Airlink Pumas outside chance of gaining a playoff spot received a setback on Friday evening when they lost their home Carling Currie Cup match 23-17 against the DHL Western Province in Nelspruit.

The most capped Blitzbok ever, Branco du Preez, has been included in the 13-man Springbok Sevens squad for the next two HSBC World Rugby Sevens Series tournaments in France and England, in one of four changes to the team that returned from a fifth-place finish in Canada last month.

Seven players without any HSBC World Rugby Sevens Series experience have been named in the Springbok Women’s Sevens squad for their first World Series event since December 2019, when they travel to France this weekend.

"Outstanding" Tshituka named Player of the Month for April

Emirates Lions flanker Vincent Tshituka capped a number of outstanding performances in the Vodacom United Rugby Championship with the Player of the Month Award for April, becoming the first forward to receive this accolade this season.

The Carling Currie Cup produced some memorable moments over the weekend that it would, frankly speaking, be very difficult to script, as both the Vodacom Bulls and Toyota Cheetahs ensured home ground advantage in the semi-finals next month.

DHL Western Province, the Border Ladies and the Blue Bulls Women, took command of the Women’s Premier Division as the competition passed the halfway stage, with all three teams scoring important victories to stay in the top three position of the tournament log.

Toulouse don’t get beaten every day and they don’t get outplayed often, so it shouldn’t be surprising that the leading team on the Vodacom United Rugby Championship log, Leinster, received rave reviews for their exploits at the weekend.

World Rugby Council has voted unanimously to adopt five welfare driven global trials into full law from 1 July. The new laws mean that the forthcoming women’s and men’s Rugby World Cups will feature the current package of global welfare-driven law trials, including 50:22 and the goal-line dropout.

A 24-man DHL Stormers squad will travel to Wales on Monday evening for their final Vodacom United Rugby Championship league match when they take on the Scarlets at Parc y Scarlets in Llanelli on Saturday, 21 May.

The Carling Currie Cup produced some memorable moments over the weekend that it would, frankly speaking, be very difficult to script, as both the Vodacom Bulls and Toyota Cheetahs ensured home ground advantage in the semi-finals next month.